The Writing of North Korea's ICBM 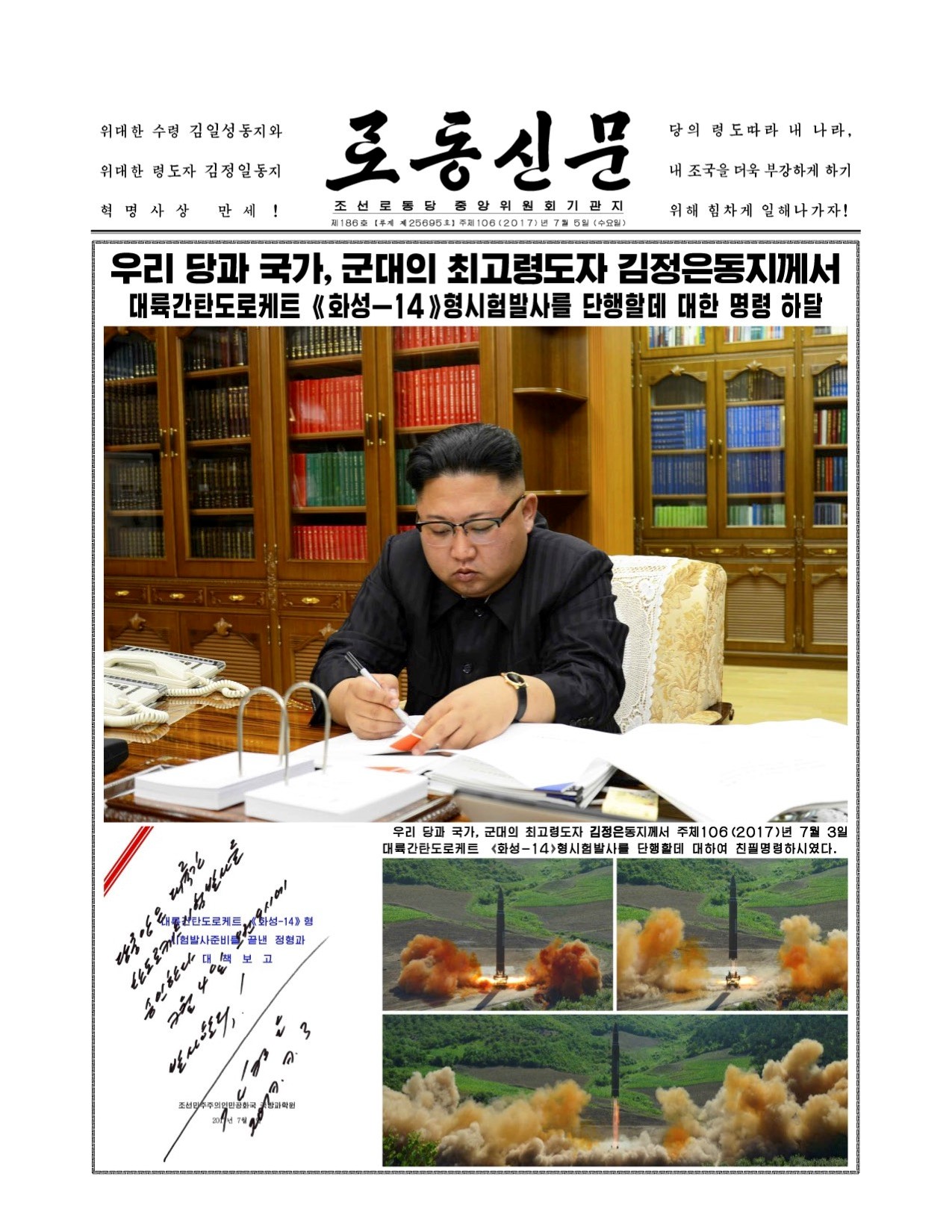 “Chinese writing … [would] appear to have been invented by a deaf man”
– G. Leibniz, New Essays in Human Understanding

We first see Kim Jung-un at his desk, writing (see Figure 1). It is a body we see externally or “objectively.” A second image (lower left) shows what that body has ostensibly written – several lines of script and a signature with an accompanying date. These, we might presume, are what the person of the body in the first image produced and saw “subjectively.” Note the peculiar double take, reminiscent of a film or a cartoon, between the first and second images. Completing the set is a third image (lower right). It depicts a missile launch unfolding in three sequential stages.

Together, these images make up one of the front pages of Rodong sinmun, the daily newspaper of the ruling party of North Korea. The issue announces the nation’s first[1] successful test flight of an ICBM (Intercontinental Ballistic Missile), which occurred the day before, on July 4, 2017. The diagonally pitched, fluid dance of Kim’s skillful penmanship reads: “The party leadership hereby authorizes the ICBM’s test flight.” This is followed by a decree: “Launch on July 4 at 9:00 AM!” Beneath the exuberant exclamation mark, a somewhat baffling inclusion for an official memo, is a dramatically long underscore. This is followed by the sovereign seal – Kim’s signature and a record of the date, “2017. 7. 3.”

All told, we are shown two sets of nested images, the three superordinate ones just described and the three-stage sequential images of the missile launch within the third superordinate one. This three-stage sequentiality encourages us to read the three superordinate images – of which that of the missile launch is but one – as also depicting a linear temporal progression, moving from top to bottom, then left to right. But a closer inspection of those images makes us stall. We stall somewhere between the leader’s look of indifference and the punctuation mark his hand has drawn: he does not look like someone who has just inserted an exclamation mark. As for his indifference, perhaps the reason for it is the small pile of documents beside him, likely awaiting his signature. The sticky page marker adhering to his left hand testifies to the status of the document to which he is presently attending – nothing special.

We are familiar with this type of indifference: it is that of the bureaucrat, a person who, in any case, is an unlikely deployer of exclamation marks. That incongruity puts into doubt the iconography of temporal progression implied on the page. Accordingly, we venture a hypothesis: could it be that this bureaucratic indifference belongs to someone who is only accustomed to the failures of the type of test fight which he is in the middle of authorizing; whereas the exclamation mark belongs to someone who has already seen an exception to that bureaucratic repetition? If true, the actual temporal progression is the reverse: the alleged scene of the leader’s written authorization was retroactively “recovered” after the successful test.

From this labor of “recovery” on the part of Rodong sinmun, we surmise the unmatched priority of the leader’s writing.  The message seems clear: the leader shall write a new epoch into being. My argument in this paper builds on this “message.” These images attest not only to Kim Jung-un’s “writing” of the missile into being. They also bear witness to the birth of a legitimate su-ryong (supreme leader). For the nation’s su-ryong are historically defined by their signature work of authorship: Kim Il-sung by the texts of “Juche philosophy,”[2] Kim Jong-il by those on “Songun ideology” (officially translated as “army-first politics”)[3] and “Juche art,” and now Kim Jung-un by the so-called “bomb of Juche.” Writing or authoring by su-ryong not only generates a body of text. It is also a speech act of sorts, specifically, an oath-taking. Here I use the term “oath-taking” in the ancient “Indo-European” sense (Benveniste 2016[[1073]: 399, 440-8).[4] In this sense, the credence of sworn words is said to be vouchsafed by
“grasp(ing) firmly” at a material object – a “wand of authority” – which is to kill the perjurer (443). That “wand of authority” for the su-ryong traditionally is “the gun” (chongdae), the ICBM being one of its manifestations (Kim 2000; Kim 2004; Rhee and Shim 2002; Seo and Kim 2002). Without “the gun,” a leader is neither a writer nor a su-ryong, strictly speaking. Hence the urgency of the ICBM for Kim Jung-un.[5] By this “writing” of the ICBM, he became the legitimate su-ryong of this nation. Thus the su-ryong-writing-ICBM schema essentially informs the nature of the present regime’s power. No subsequent inquiry into the nation’s contemporary politics can afford to ignore this inextricable associational trinity.

What can anthropology – as characterized in the present special issue’s call – say about this ternary schema and the regime of political power configured by it? I ask this question not to add yet more knowledge, an anthropological knowledge, about North Korea. I ask it rather so as to interrogate anthropology, with North Korea’s newly acquired, ICBM-adorned figure of power as our methodological object.

Hoon Song teaches Anthropology at the University of Minnesota, Twin Cities, and is the author of Pigeon Trouble: Bestiary Biopolitics in a Deindustrializing America. He is currently working on a manuscript titled Incompossible North Korea (Fordham University Press).